Hindin Marquip Limited results from the merger in 1992 of Martin Equipment Limited established 1945] and our opposition at the time, Hindin Engineers Limited [established in 1946]. The company is a fully owned subsidiary of Place Corporation Ltd, an investment company owned and controlled by the Brown Family.

The R.R Martin Equipment Co Ltd commenced business with a capital of ₤2500. E.B. Brown was chairman and R.R. Martin was managing director. Both office and manufacturing were operated from premises in Albert St consisting of a mere 616 square feet. From selling air compressors and spray painting equipment Hindin Marquip Limited has grown its business to include a distribution centre in Auckland, Hamilton, and Christchurch.

Doug Brown, after returning from service after WW2, joined the business in 1947 on a salary of £364. While sales for the year were budgeted at £9000 issues facing businesses today were the same then. An extract from the annual report at the time: “Though we are now fairly well known to most prospective buyers, our selling facilities, even with added staff, will not be adequate to quickly dispose of goods on arrival, and there will generally be a time lag of some months between meeting our drafts and receiving payment from customers for relative sales. Provision must therefore be made to finance shipments.”

In other words: not enough customers, too much stock, inadequate cash flow. Doesn’t that sound familiar! In 1952 the business relocated to Wakefield St. Initially

to number 37 and 6 years later to number 79. There was however an issue that remained unresolved. The existing tenants who were operating an establishment known in those days as “a business of ill repute” still had to be removed. They were eventually coerced to move on by paying an exorbitant price of £1000 for their furniture in addition to the £4000 for the property. Unfortunately before the building was demolished squatters moved in presenting the next challenge for management. In 1956 the business name changed to Martin Equipment Ltd.

The Wakefield St premises were only metres from Queen St. During a period of rapid growth in Auckland in the seventies and eighties the area became surrounded by high-rise buildings to service office, the expanding tertiary education sector and the burgeoning apartment industry. Towards the end of this era truck loads of material were seen passing by from the Sky Tower excavations. When our local Pub, the Globe Tavern made way for yet more apartments it became obvious this was not the place to be operating a wholesale distribution facility! By the 1960s manufacturing had expanded from just compressors and paint tanks to masking tapes, ear muffs, safety goggles and air filters. Temporary space was found firstly across the road from Wakefield St, in St Paul St and in 1964 the factory relocated to “temporary” premises in Neilson St, Te Papapa. Eventually in 1975 a building was purchased in Olive Rd, Penrose.

By this time the advent of containerisation made deliveries into the City impractical. The Penrose factory was also used as a de-van point for containers and as a bulk store. Many kilometers and man hours were clocked up transferring goods from Penrose to the city on an often overloaded utility vehicle.

In 1985 a subsidiary was set up to distribute Taiwanese air tools independently from the rest of the business – this was done as we trod cautiously with supply lines from new Asian sources in case there were product quality issues! Our caution proved unfounded and the product range has grown to 20 product categories and brands with supply from the Americas, Asia, Australia and Europe.

By the end of the eighties it was necessary to consolidate both Auckland operations. An agreement was entered into with Chase Corporation to purchase land at Three Kings, conditional on the sale of Wakefield St. For better or worse the property crash brought this deal to an end and it was not until 1994 that all operations were brought under one roof at 1012 Great South Road, Penrose. Within a year storage for inventory had become an issue: we had run out of room again! This was partially overcome by product rationalisation and better racking systems.

In 2002 we became the first New Zealand member of the Compressed Air Association of Australia. In the face of an increasing trend for many in the industry to grossly overrate the performance of their compressors, CAAA members display on their compressors and promote in their literature correct information, in particular relating to the correct free air delivery so that consumers are informed clearly what their compressor is capable of.

Towards the end of 2013 we completed a 1400 square metre extension to our warehouse in Penrose. This was quite an achievement after 5 years of design, re-design, and negotiating stumbling blocks imposed by Auckland City. One mandatory requirement was retro-fitting smoke alarms into our existing cupboards and in the new external drive through loading bay – we still agree to disagree who will mow the “berm”!

Early the following year we upgraded our computer system to Propella and took on the distribution of Festool power tools from Germany. Both of these moves have enabled business growth and improved economies of scale in what had otherwise been a period of slow growth.

In the early days, the business was “direct sell”. The environment consisted of import license and the luxury existed of being able to take indent orders for delivery often months in advance. This was not to last and as the markets freed up we realised two important factors: firstly we recognised the need to expand our product range and secondly we appreciated the benefit of marketing our products through a distribution network – and that is how it remains today. With over 50 containers delivered each year it would be impossible to operate efficiently any other way. 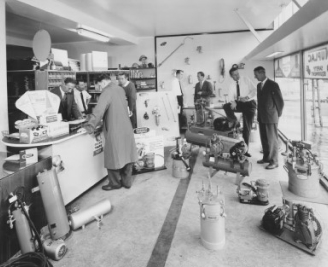